Things are happening here. Big things. Things that have been planned and thought about and discussed for some time. In fact, I knew I wanted to do some of these things when we first saw the house (7 years ago!)


We have builders in. We have a temporary kitchen (aka the batcave) and many boxes. There are tiles and lights and worktops and all sorts waiting to be unpacked and installed.


It's an exciting thing. We've just moved beyond the slow structural elements of the build, and into the quicker and more palpable progress of wall finishes and kitchen installation. Yesterday the kitchen arrived in a myriad of boxes, and this morning the joiners arrived to start putting it together: a three dimensional puzzle of components.


It feels very grown up, although we are not thinking at all about the grown up bill that will also arrive shortly. 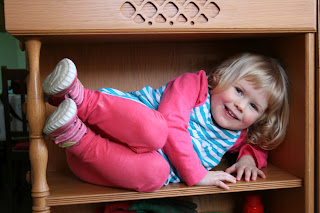 the jelly bean tidies herself away in the old kitchen


The contractors have been great - tidy, considerate and punctual. The gaffer, is a very likeable man who says things like 'no problem', 'we can do that' and 'its all pretty straightforward'. We like him.


There is knitting here too, of course. Hat no #9 sprang off the needles yesterday and no #10 is just being cast on. Tonight it's a knitting night, so I'm planning to take Deli for a night with the girls. Hopefully it'll be her last night as a UFO!


In other news, some sunshine and the long jubilee weekend meant a wee bit of time in the garden. The chiddlers helped me plant the rather wizened seed potatoes that had been waiting to be planted. And, the wigwams for our climbing french and runner beans are also up. Must plant the seeds now!