We've been tidying up and rationalising and getting rid of a few things here and there. A parcel of baby/toddler clothes for a friend, a bag of old work shirts for the charity shop (I had first dibs and have kept two for repurposing), a few toys which are a bit young for our two beans now. Perhaps because of this, and perhaps because a work colleague is knitting her first scarf, I had an itch to scratch. Some immediate knitting and stash busting gratification was called for. I knew exactly what I wanted to do - another of the purl scarves from last-minute knitted gifts. So, I reached into the stash and pulled out a super chunky jumper (another charity shop find) that I had partly deconstructed a while back. 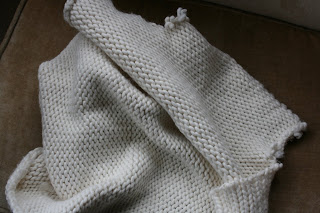 I snipped and ripped and frogged and wound myself a big ball of the creamy yarn. Then reached into the stash for something hairy - a mohair yarn (bought in a charity shop years and years ago), and something smooth - a ball of unnamed DK (?Sirdar). I set to and knit and knit and knit - all through Harry Potter and the deathly hallows part 1 (twice). And then I finished, and I put it in my box of gifts, ready for a birthday or other deserving event/recipient to come along and claim it. 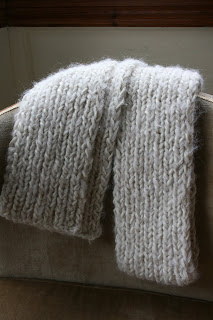 Pattern: Purl scarf, from last-minute knitted gifts
yarn: various from stash
Mods: omitted fringe
time taken: Friday 28 July - Sunday 30 July 2011
And, I made a dent in the stash to boot (half a jumper, plus three balls of mohair and one of DK yarn). There wasn't much left. 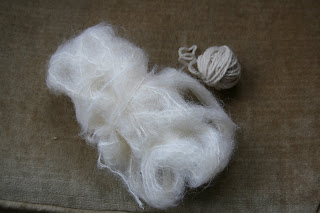 Other projects are coming along here and there. Drew is almost up to the armholes (again), and there has been quite a lot of sock action too. Husband sock no. 1 is finished, but no. 2 not quite cast on. The seriously stripey sock experiment was ripped (but I learnt what I need to learn) and is being reknit. And, then there are the innocent hats. I saw this the other day and realising that I live nobbut a stone's throw from Age UK's Scotland office, I thought I would join in. I've knit 4 so far, and as they take hardly any time I think there might be a reasonably large pile before too long...

Last night I got my sewing machine out to tackle the pile of mending/sewing bits and bobs which is threatening to take over the dresser. I finished another nappy (no. 6), repaired one pair of shorts and one pair of trousers (both belonging to the bean) and redecorated one of the jelly beans t-shirts to cover up the mysterious spots/stains which appeared recently. DH was pleased by the reduction in stuff/clutter, and I was just pleased to get a few more things done. Tick. It's satsifying, isn't it?
Posted by Knitlass at 04:06