Finally. The finishing took a bit of time - it's such a nice little knit, but the finishing is a bit time consuming... every time I make one (I think this is the third one), I think there must be an easier way of doing this, but I havent yet bothered to work out what that is. 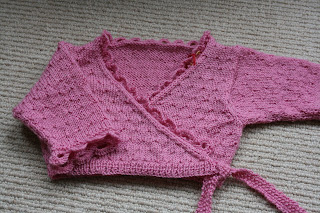 Item: Dolly from JB29 by Martin Storey
Yarn: Patons 4 ply (I think), 100% wool
Time taken: a while! April-July 2009
Mods: picked up and knit the stitches for the ties, rather than sewing them on separately. No other mods.
Now that's Out Of The Way, there are other things to get on with. I really need to knit a hat for a friend's upcoming birthday, but instead, I have cast on for a childrens cardigan from the Rowan Family Collection. I decided that it would be a relatively quick project, and that it would make a useful inroad into my stash, which is still overflowing - although things are easing slightly. Last night I was able to organise some of the overflow into one of the storage tables, so something must have happened!
I'm knitting the cardigan using some balls of Jaeger Prelude which I picked up in a charity shop for 50p per ball. It's washable - but has some woolliness - and should make quite a good children's garment. Hopefully it will be fairly gender neutral, although it's primarily destined for a smallish girl. I managed a few rows over lunch today, while I was flicking through the Rowan magazine and newsletter which arrived through my letter box this morning. Mmm. 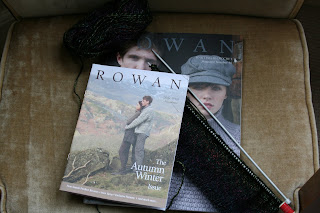 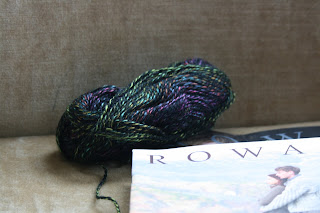