The drama continues here, although we have now watched all of The Killing (series 1). It's good - and I am looking forward to catching up with series 2 sometime...

Putting that aside, perhaps it is just as well I started my Christmas crafting when I did. There has been little action on that score since the beginning of December. And, the socks I have started for DH have stalled a bit - they are toe-up and just look a bit, well, wrong. I am undecided at the moment, but am waiting for a new moon or something before they go to the frog pond...

The other dramas in our house have been a little less knitterly.

On Saturday the television stopped working - the remote control worked, but the telly did not. Fuse was checked, words were sworn and various things banged, bodged and shaken. To no avail. It was dead. It had departed. It was an ex-TV.

Given that we my husband has been discussing buying a new telly for months now, it didnt take us long to come to the conclusion that we should buy a new one. The old telly (about 10 years old - so box shaped rather than a flat screen) had been on the blink for a while. DH has been researching all the options - wireless, dongles, boxes, recorders, LCD, LED. But it all just made my head hurt, so I told him we should wait until the old one gave up, and that's what we did. On Sunday morning decisions were made, and a new TV was procured (look it up on tinternets, ring up shop, pay and collect later). One thing sorted.

Yesterday, I got into the office and sat quietly at my desk sewing on some buttons while my laptop powered up and my inbox caught up with itself. I was finishing those wee jackets I started a week or so ago, for those little twins I mentioned. As I sat and sewed, I scanned my inbox - and there was a birth announcement! Eek! Born on Friday, a few weeks earlier than expected and hoped, but safely born and good sizes (c. 4lb each). Welcome to the world little ones - Nathaniel and Lilith - we wish you and your clever mama and papa all the very best. There is a parcel of things on its way - including those two hats, and two wee jackets (paxton pattern from stitchymama via ravelry). 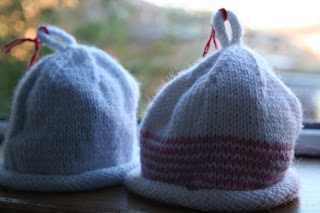 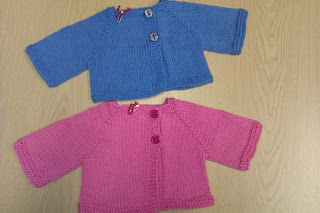 Pattern: Paxton Preemie and Newborn Jacket
Yarn: 100% cotton DK (pink = Sirdar Carousel; blue = Jonelle) from stash
Size: 6-8lb (preemie/small newborn)
Notes: no mods - jacket with long sleeves. buttons from stash. This is the second time I have made these jackets - they knit up quickly and take almost no time to finish because of their top-down seamless construction.

This morning, after counselling both of my small people NOT to sit on window ledge next to Christmas tree, a few moments later the bean arrives in the dining room (where I am waging war on a tsunami of crayons and pens and bits of paper that have suddenly hurled themselves onto the floor) announcing that the wire has got his leg and the christmas tree has fallen down. The jelly bean wets herself at that very moment and my sense of humour disappears very rapidly. No-one was hurt, and the only thing broken (apart from my spirit) were a couple of decorations on the tree. Grrr.

Santa came to the rescue. In times like that emergency chocolate really is the answer, and if that is shaped like santa, then all well and good...
Posted by Knitlass at 07:28