January has been a bit of a disaster knitting wise. The purple Christmas socks are still on the needles, stalled somewhere before the heel flap of the second sock, and the Ava that I cast on. Ha. It is no more. It has been cast aside. Frogged. Done away with and sent very firmly to Coventry. 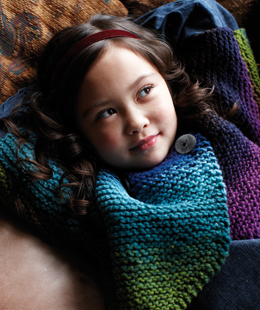 It's a lovely pattern (probably). But we didn't get on. I kept mixing up the wrong and right sides so the button holes appeared on the shoulder, rather than the centre front/flap. And it was all taking longer than I anticipated (because I had to keep correcting my mistakes), so I ended up improvising an infinity scarf for that 6 year old whose birthday was looming in front of me. And then. Last night. When I got to the bottom of the first front I cast off and discovered the fatal flaw. The front and back did not match up. By about 2 inches. Rather more of a mismatch than can be dealt with by finishing tricks. I've got no idea why that is/was, and I didn't bother to try and find out. I frogged it instead, and have put the yarn back into my stash (grrr).
I still love the socks off the Winter Kids book though, so this morning I cast on for a Doris. There's a small girl we know that will be 3 at the end of the month and I'm keeping my fingers crossed that this time the knitting gods will approve. 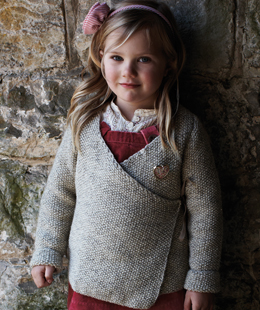 February seems to be a good time for a spring clean, so I'm giving myself one, and am looking forward to a gluten free month. I'll (probably) keep away from sugar and chocolate too, although my resolve may weaken on that one on account of the two bars of delicious chocolate sitting in the fridge!
Posted by Knitlass at 04:51