What happened to March? It's such a long month, but this year it's stolen away without me really noticing. Anyway, news to report: the bobble cardigan is finished (hurrah), has been worn (several times) and washed (once). 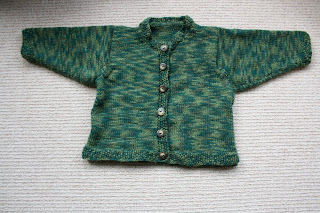 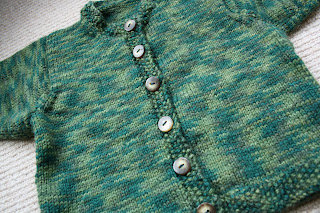 Buttons: vintage from the button box

Mods: no bobbles (clearly)
If I made this again, I would: add a bit of length to the arms
Time taken: inordinate for something so small (September 2009-March 2009)

It's great; it looks good on, and the bean seems to like it most of the time. Late afternoon has become a time of ripping off cardigans, and this one is no exception. "Cardigan off mummy" he says and pulls the buttons and buttonholes much too hard for comfort. Toddlers dont really know about handknits, do they? But it looks cute... I'm not sure it will last till he's 3 (this is the age 2-3 size) but no matter, there's plenty of yarn left in the stash.

Another FO sprang off the needles this week: a baby beanie - as always knitted in the round using a grumperina stripe (alternate rounds of colour with no jogs). This one is destined for the head of a newly arrived baby boy (probably called James) who was born at home, in water on Monday evening a year and a day after his parents were married. Many congratulations to you Tim, Tee and baby James (probably). 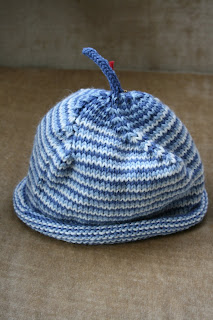