Winter is here - I'm chilly inside the house and yesterday DH had to work in the snow! I'm not sure what happened to autumn - I think it blew away in the gales. The crazy weather is no doubt a sign of the terrible things we are doing to our planet.
Regardless of the weather outside, my needles have been clacking away and I've managed to finish two stripey tank tops (age 3-4) from the Rowan Family Collection. Between the two I managed to bust almost 3 balls of Jaeger matchmaker DK (left over from DH's Celt) and 2 balls of Patons DK (I think) out of the stash. A modest inroad, but it was worth it. I love these tottie tank tops! 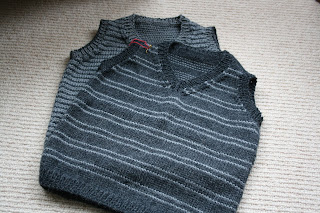 I knit both flat (as instructed) using 4mm dpns (not mentioned in the instructions), so that there was no need to cut the yarn in order to achieve the original stripe pattern. I also changed the shoulder shaping on the second tank - and rather than cast off 3 stitches on one row and the last 2 on the following row, I just cast them all off together. I dont think such refinements are required in this pattern or for boys of this age. The different stripe pattern on the second tank (light grey with dark grey stripes) was dictated (or inspired!) by the yarn available. 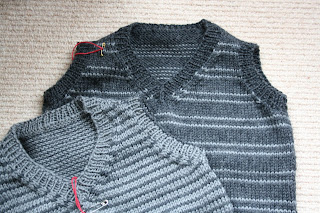 Both tanks are nestling in the gift stash ready for despatch. I tried the first one on the bean the other day - he's 21 months now - and although the tank was big on him, it was quite wearable. As a result I decided that the smallest size (3-4) would do for a 2yr olds birthday, and immediately cast on for the second tank. All in all I think the second one took about 2-3 evenings to knit and one to finish. The bean will get one too once I've got a few other things out of the way...!
Between tanks I managed a bit of WIP wrestling and finished the first sleeve on the bobble cardigan. One sleeve and one front to go, so the end is in sight (yoohoo). Yesterday I cast on for another gift project - some child's mittens from 'Hats, Scarves, Gloves'. I'm knitting both mittens at the same time, and I'm already up to the thumbs. Thumbs, is it hallowe'en yet?
Posted by Knitlass at 06:38